Vistinomer has provided strong evidence of its dedication to objective and fair fact-checking with clear methodology and criteria. My advice would be to publish fact-checks more regularly and to provide more information on their projects and their finances.

Criterion 1a
Proof of registration
Evidence required: Please provide evidence that the signatory is a legally-registered organization set up exclusively for the purpose of fact-checking or the distinct fact-checking project of a recognized media house or research institution.

Vistinomer (Truthmeter) was established and is published by the Metamorphosis Foundation, a non-governmental organization incorporated in Skopje, Macedonia and registered under the Associations and Foundations Law.

Vistinomer is a public accountability web site. Our core mission is to increase the transparency and accountability of the public officials, political parties and state institutions. One of the main activities in accomplishing our mission consists of fact checking statements of the elected and appointed officials, public figures with influence over the creation of public policies and press releases of the political parties.

Vistinomer also analyses the state of fulfillment of the political parties’ election promises, as well as the issues regarding accountability and transparency practices of the local and state institutions.

Vistinomer is not separately registered. According to the Macedonia’s media/broadcasting laws internet media/publications do not require registration with the state/media regulator.

Attached is the Macedonia's Central Registry incorporation document for the Metamorphosis Foundation (3 pages). 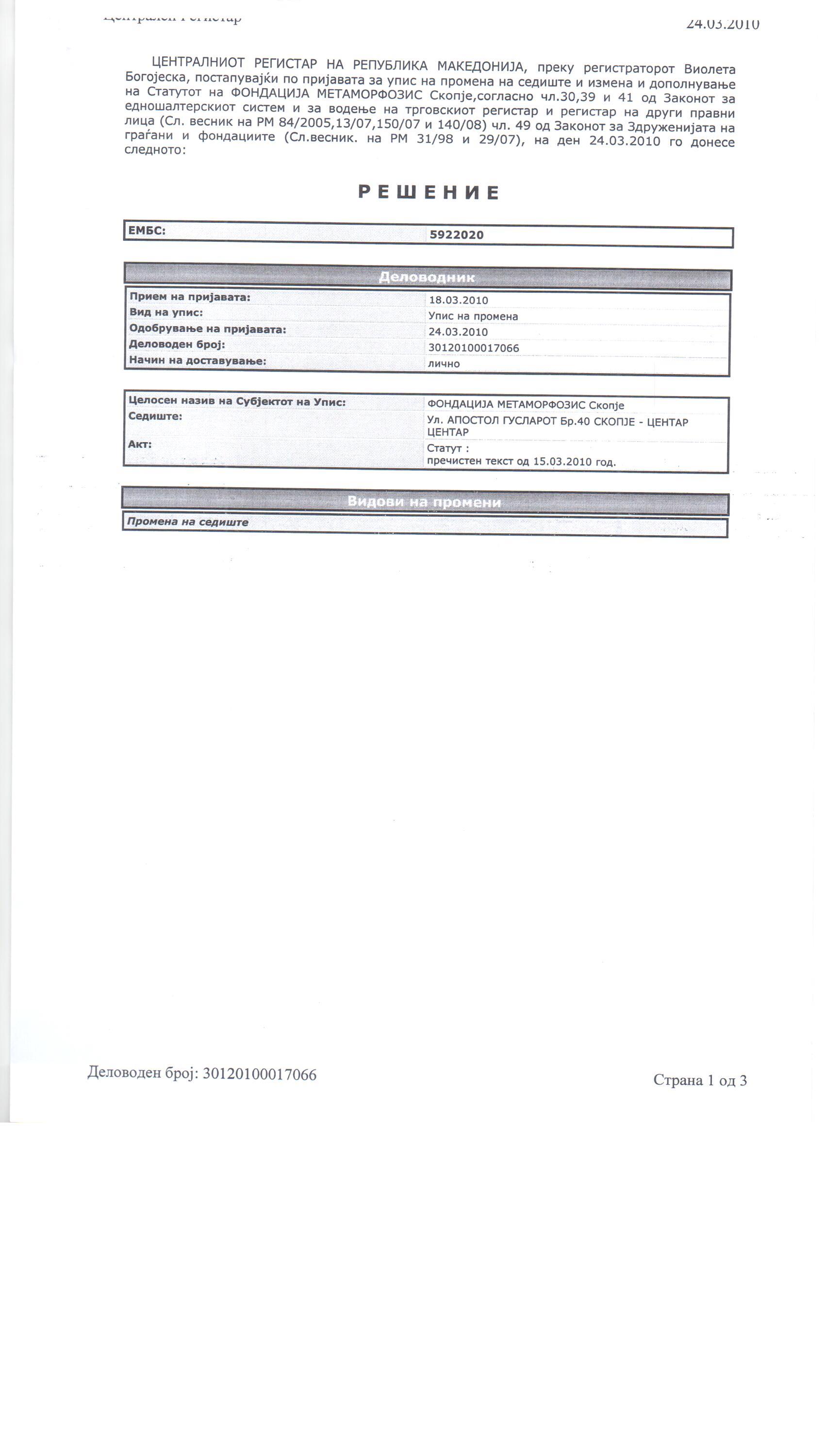 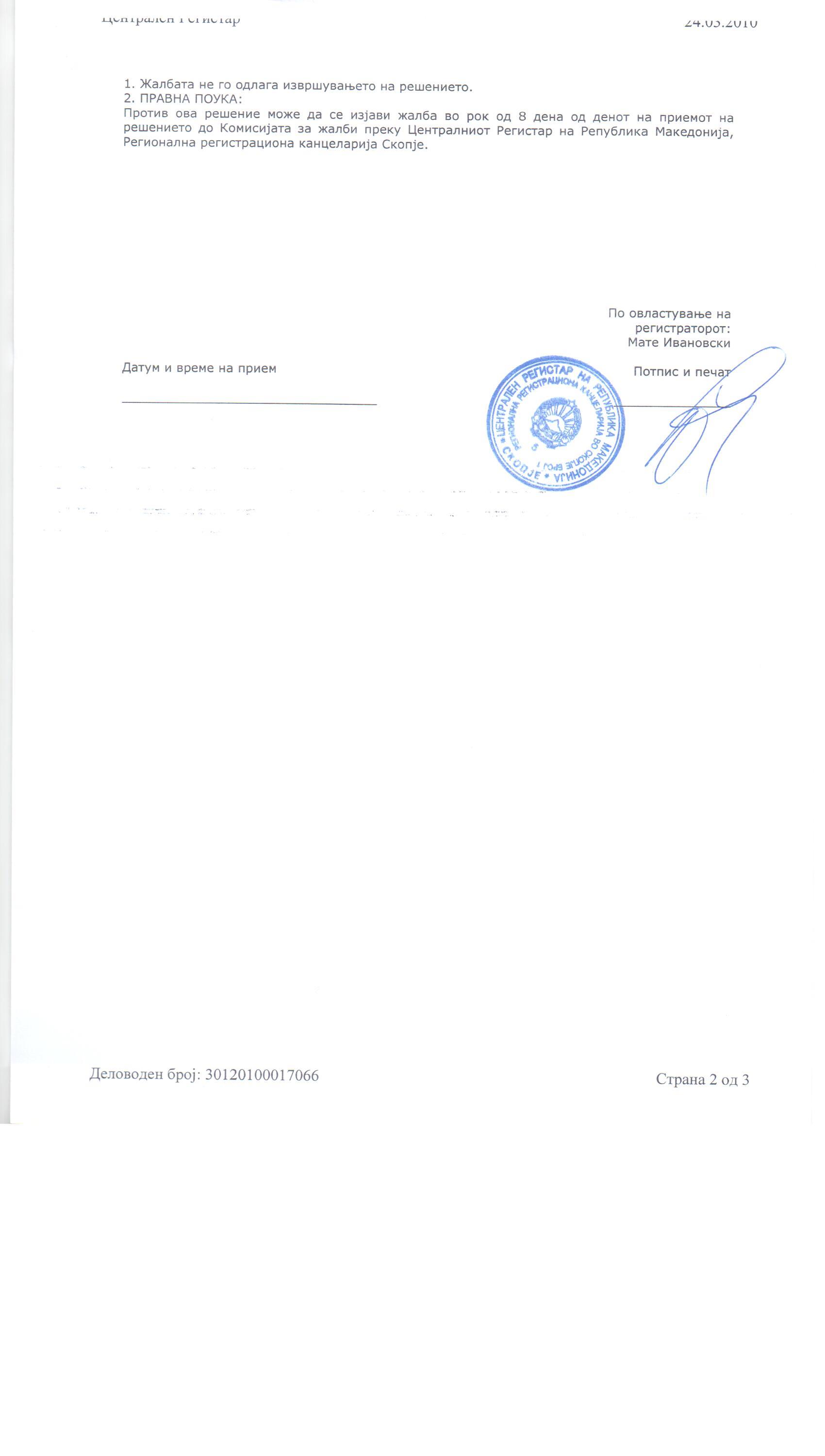 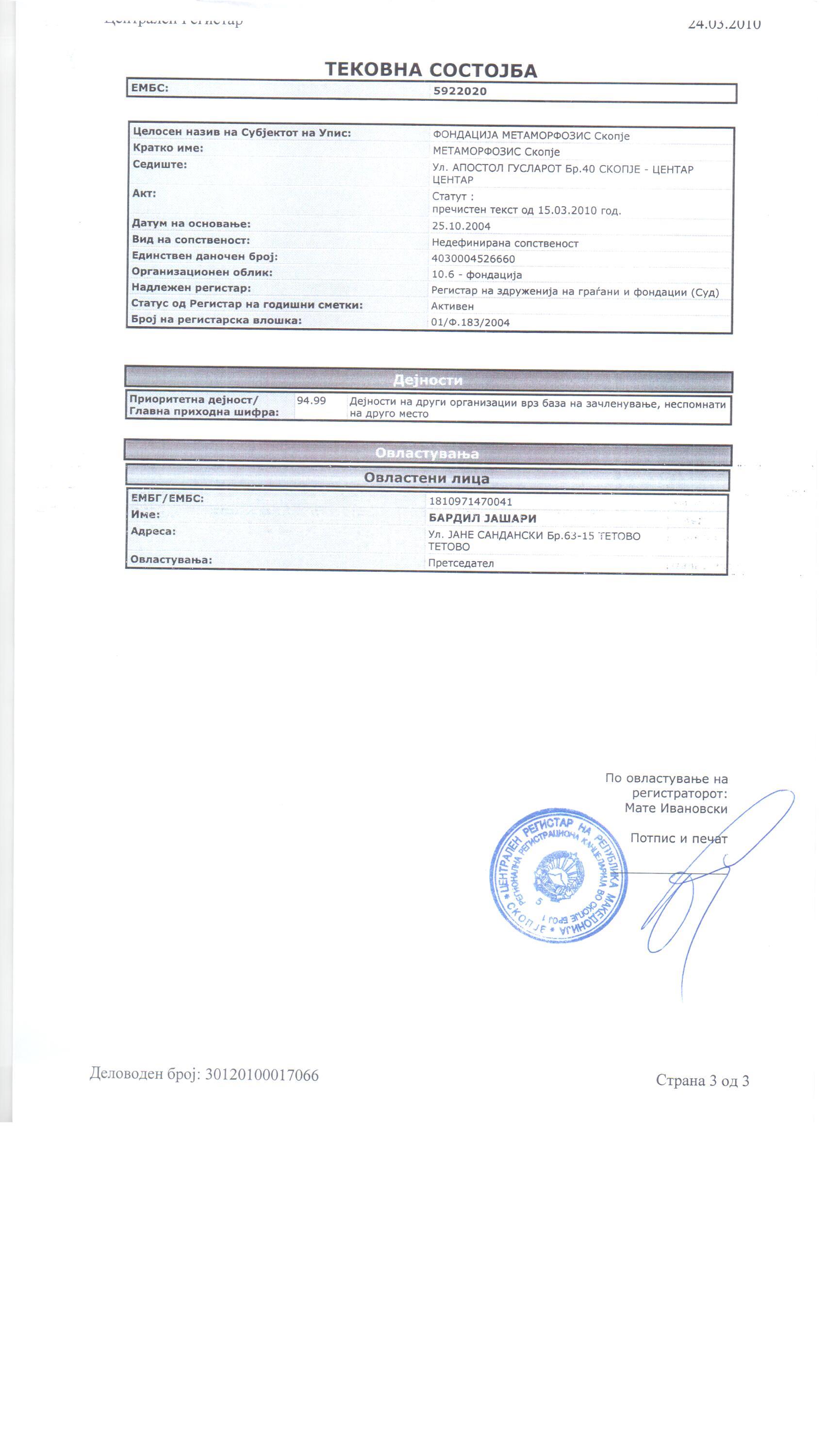 Vistinomer/Truthmeter is a project founded by Metamorphosis Foundation dedicated mainly to fact-checking.

done_all 1a marked as Fully compliant by Ivana Jeremic.

Criterion 1b
Archive
Evidence required: Insert a link to the archive of fact checks published in the previous three months. If you do not collect all fact checks in one place, please explain how the fact-checking is conducted by your organization.

This section contains all of our fact checks. The whole section is searchable by the name of the politician fact checked, subject of the fact checked statement (broad description), date range, keyword and rating. The section search box is at the top readily accessible to the readers.

The signatory publishes fact-checks on average every week, but there were periods with more than 10 days between two fact-checks.

done 1b marked as Partially compliant by Ivana Jeremic.

Criterion 2a
Body of work sample
Evidence required: Please share links to ten fact checks that better represent the scope and consistency of your fact-checking. Provide a short explanation of how your organization strives to maintain coherent standards across fact checks.

We select the statements to fact check by the importance of the source, as well as the importance of the statement subject on the lives of the citizens. We diligently follow the methodology in order to secure consistency and fairness among different statements. When it comes to sources, they are clearly stated in the articles by linking, but we also include a detailed and thorough list of sources at the end of every fact check. Possible conflicts of interests are stated on the spot, so that they would be cleared at the time the reader encounters them.

Here is a selection of our fact checks published from October 2018 up to January 2019:

Vistinomer uses the same methodology for the fact-checks and is fairly covering different topics and different political actors.

done_all 2a marked as Fully compliant by Ivana Jeremic.

Criterion 2b
Nonpartisanship policy
Evidence required: Please share evidence of your policy preventing staff from direct involvement in political parties and advocacy organizations. Please also indicate the policy your organization has as a whole regarding advocacy and supporting political candidates.

Metamorphosis Foundation is and has always been a non-partisan organization. Neither the Foundation, nor the employees have ever publicly supported any political party or any candidate for a political office during elections.The employees, Vistinomer staff included, do not involve themselves directly in political parties and advocacy organizations. We go to great lengths in trying to include fact checks of statements made by politicians of all parties.

2. Vistinomer team follows the Metamorphosis Foundation Integrity Policy (attached here) based on the organization's Code of Conduct, which is in turn adopted by the Managing Board.

The Article 2b of the Integrity Policy covers the issue of the organization's political independence and states the following:

"As non-partisan non-governmental organization, Metamorphosis Foundation shall maintain independence and not be aligned or affiliated with any political party, although it may share a common political or legislative cause within the limit of its mission, stated objectives and legal structure.

3. Vistinomer team also follows the Journalist Association of Macedonia Code of Ethics. This is a requirement for all the Vistinomer team members, as well as for the journalists working on all other Metamorphosis Foundation media projects.

The Article 14 of the Code of Ethics states the following:

"Reporting on political processes, especially elections, must be impartial, balanced and fair. The journalist must make professional distance from the political subjects."

Vistinomer web site at the Contact/Credits page provides links to both Metamorphosis Foundation's Integrity Policy and Journalist Association's Ethics Code in order to inform the audience about the professional obligations under which the Vistinomer team operates.

Vistinomer has clear policies preventing staff from active involvement in advocacy. Their policy has been highlighted on their website as well.

done_all 2b marked as Fully compliant by Ivana Jeremic.

Criterion 3a
Sources Policy
Please share a brief and public explanation (500 words max) of how sources are provided in enough detail that readers could replicate the fact check. If you have a public policy on how you find and use sources for your fact-checking, it should be shared here.

All of our quotes are differently marked than the rest of the article in bold letters to be clearly and instantly recognizable. This goes for statements, as well as when we quote documents. This elements of our fact checks are very important and our rating depends on them, so we want them to be easily noticed by our readers.

Vistinomer strives to use primary sources whenever possible. That means we give priority to official databases and documents over media reports about them and to witnesses on the spot over the second hand witnesses. Nevertheless, primary sources are also checked and the information they offer is compared to other sources.

Whenever we are forced to use secondary sources, we do all we reasonably can to check their claims and compare them to other sources in order to establish the similarity of claims.

We go to great lengths to offer proper attribution of all sources. When it comes to attribution we include explanations regarding the origin and the quality of information, but we also include the required caveats to help the reader in deciding how accurate is the information offered.

All conflicts of interest are clearly stated right away on the spot, as they are encountered.

Our methodology also provides guidelines about the use of sources: http://vistinomer.mk/metodologija/

Vistinomer publishes a list of sources below every article and refers to the sources in the fact-checks. Their methodology has been explained on their website as well.

done_all 3a marked as Fully compliant by Ivana Jeremic.

Criterion 4a
Funding Sources
Evidence required: Please link to the section where you publicly list your sources of funding (including, if they exist, any rules around which types of funding you do or don't accept), or a statement on ownership if you are the branch of an established media organization or research institution.

We clearly state our funding sources in at least three separate locations. The first location is the About Us page of the web site: http://vistinomer.mk/za-vistinomer/ where we describe who our sources are, but also the timeframe of funding. Here we also name our partner organizations, so that our readers would receive a wider picture about our relationships.

Also, bellow every one of our fact checks we do publish a disclaimer to inform our audience who stands behind the opinions of the above article on that particular page, and the names of our funding sources are also stated in these disclaimers.

Even though there is a list of donors we do not have more information on the projects and the budget nor their spendings. As it's not a separately registered organization it's hard for the public to get information about Vistinomer's financials.

done 4a marked as Partially compliant by Ivana Jeremic.

Criterion 4b
Staff
Evidence required: Please link to the section detailing all authors and key actors behind your fact-checking project with their biographies. You can also list the name and bios of the members of the editorial board, pool of experts, advisory board, etc. if your organization has those.

Link to the Vistinomer staff and info page:

Vistinomer has all the names of the authors and their biographies easily accessible to the public on their website.

done_all 4b marked as Fully compliant by Ivana Jeremic.

Criterion 4c
Contact
Evidence required: Please link to the section where readers can get in touch with the organization.

The Contact page offers multiple ways of communication with the Vistinomer staff: contact form, e-mail addresses of the staff, brick and mortar address, as well as the institutional phone number.

Besides the form on their website, visitors may send direct emails to the authors as their email addresses are listed on the website.

Criterion 5a
Detailed Methodology
Evidence required: Please link to a section or article detailing the steps you follow for your fact-checking work.

Here is the link to our methodology:

Vistinomer has a transparent methodology on its website with a detailed explanation of the criteria.

done_all 5a marked as Fully compliant by Ivana Jeremic.

Criterion 5b
Claim submissions
Evidence required: Please link to the page or process through which readers can submit claims to fact-check. If you do not allow this, please briefly explain why.

Here is a link to the page open to submitting readers claims:

Also, bellow every article we publish there is a line informing the readers to follow the clearly marked link, which leads to this contact form, whenever they have a claim they need to submit.

Vistinomer has provided a link for their readers below every article with the explanation of how to send their proposals and comments.

done_all 5b marked as Fully compliant by Ivana Jeremic.

Criterion 6a
Corrections policy
Evidence required: Please link to the page with your policy to address corrections. If it is not public, please share your organization's handbook.

Vistinomer has a separate page titled Corrections and Clarifications: http://vistinomer.mk/korektsii-i-pojasnuvana/

This page contains step-by-step explanation how to submit a claim, who will receive it and who will decide on the merit of the claim, how and where will the claim be published (if needed), as well as how to obtain the Vistinomer team answer on the claim by e-mail (if needed). This page is an excerpt of the Metamorphosis Foundation institution wide Corrections and Clarifications Policy. The page contains a link to the policy document, as well as Annex to the selection of articles of the Macedonian Constitution and laws upon whom this policy is created.

done_all 6a marked as Fully compliant by Ivana Jeremic.

Criterion 6b
Examples of corrections
Evidence required: Please provide two examples of a correction made, or correction requests handled, in the past year.

Truthmeter team has not yet received claims from the readers through the above stated channels. As soon we receive any in the future we will submit them promptly together with the explanations on how these corrections claims were handled and what remedial actions were taken (if needed).

Vistinomer hasn't received any corrections yet.

done_all 6b marked as Fully compliant by Ivana Jeremic.